“Ryan’s attention to detail and his amazing way to teach students who understand his teaching protocols is a rare gift that enables himself to be what I consider one of the leading coaches in the country for both hitting and pitching.”

From the first few times I met Ryan during a summer camp I was hosting in 2008, I knew that there was something very different about Ryan and the way he operates in his life. I am the owner/operator of Jim Wagner’s ThrowZone Academy in Santa Clarita and I have provided baseball pitching instruction to thousands of players over the 17 years working with pitchers, including Trevor Bauer of the Cleveland Indians and Tyler Glasnow of the Pittsburgh Pirates. In my 17 years I have never worked with a client who was as dedicated to his craft as Ryan was.

Ryan drove from Tustin to Santa Clarita (over 160 miles roundtrip) at least three days a week to further his arm strengthening training. This was a small part in Ryan’s path to professional baseball and now running his successful baseball training facility, Chapman Baseball Compound.

Ryan’s attention to detail and his amazing way to teach students who understand his teaching protocols is a rare gift that enables himself to be what I consider one of the leading coaches in the country for both hitting and pitching. CBC is a beautiful facility where learning and being able to apply his teaching protocols to game use is second to none. I believe that Ryan is and will continue to be one of the leading instructors and consultants to many professional, collegiate, and HS players. CBC is a place that the best players in Southern California will go for years and where, also, Major League baseball organizations will send their players with the hopes of providing their organization with All-Star caliber players on a yearly basis.

As his former coach and now consultant, I would not hesitate to send players to Orange County to work with Ryan. Players working with CBC will be more prepared and ready to play at the highest level. Ryan Chapman will make your player better and I would stake my reputation in baseball on that!

“I consider CBC to be one of the most critical components to my year long baseball routine.”

Coach Chapman and Chapman Baseball Compound is the perfect place to develop your baseball skills. CBC has the right combination of expert advice, training facilities and fellow players that have helped take me to the next level. I have seen the results, both on and off the field. I feel more confident going into the games because of the improvements in both my physical and mental approach at the plate. I consider CBC to be one of the most critical components to my year long baseball routine.

“Ryan has 100% turned me into the elite player and hitter that I am today.”

Ryan has 100% turned me into the elite player and hitter that I am today. I am able to go up to the plate with a confident approach, with a swing that has been crafted by him and I over a lot of months with thought, analysis, and hard work. His training sessions are detail oriented with the number one goal in mind to make you a better player. He has developed a culture that can’t be beat, and my fellow teammates and I love getting to work day in and day out at CBC. Ryan has not only been the offseason coach that I felt I needed, but a mentor that I can look up to on and off the field.

“We couldn’t be happier than to see [our son’s] confidence soar and his game elevate as he begins his high school career.”

We wanted to leave this for you to commend you on the outstanding work that you have done working with Ethan. He was struggling in his last year at the plate and we were searching for opportunities to get him performing more consistently as a hitter. We were fortunate to find you at the cages – we were impressed with your demeanor working with the other kids. Watching you educate the boys – whether it be pitching or hitting – in a calm and positive manner was refreshing to us. So we happily started a couple of lessons and the impact was immediate.

Ethan’s approach at the plate changed drastically. Mentally he has been stronger as his confidence has soared whereby he expects to get on base at every at bat. In addition, your work on his form and technical aspects of his swing – through film and observation – helped him put the ball anywhere on the field. We couldn’t be happier than to see his confidence soar and his game elevate as he begins his high school career.

In my experience, the mark of a great coach is what the players are able to take away. And Ethan has been able to utilize his learnings from your lessons both at practice, personal BP time and in games. So your time with him is having a lasting, positive impression. We are grateful that we found you and have thrown your name to others.

My 13 year old son, AJ, has been working with Ryan Chapman for 4 years. AJ attends hitting and pitching sessions, as well as, strength and agility classes with him weekly. He is also his baseball coach. AJ has worked with a few instructors over the years and what stands out about Ryan and his program is his investment into my child and the “process.” His focus is on mechanics, velocity, strength and arm care for the long term, not just today. Ryan has encouraged AJ’s love for the game and is teaching him the tools to ensure longevity. He creates an environment that the work he puts in today will work well into the future. Working with Ryan has taught AJ to be a more athletic and explosive pitcher and a more powerful and confident hitter. What I see when he takes the mound or steps up to the plate is a self-assured, mentally prepared baseball player with a goal and a clear vision of the task at hand. He has given him the priceless gift of a strong work ethic that will expand beyond baseball. Chapman BaseballCompound is the whole package. We are ever grateful and plan to continue with Ryan and Chapman Baseball Compound for years to come. 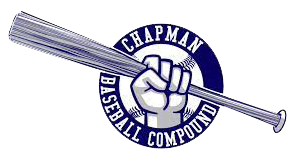